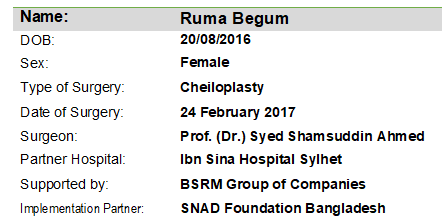 When Ruma was born her parents’ joy lasted only for a fleeting moment before they saw her cleft conditions. In an instant, their hopeful excitement gave way to overwhelming sadness. Ruma’s father, Enam Ahmed consoled his wife, Halima Begum, encouraging her to be strong and that they would do everything they could to overcome this situation. Though the parents were heartbroken, they held fast to their faith. They believed that their daughter’s condition was an obstacle sent by God for them to overcome. Indeed, their faith would be tested.

Devastated by the birth defect and uncertain about Ruma’s future her parents, Enam and Halima had broken down completely. Still, they remained hopeful that she would one day receive surgery. Both of them had to deal with cruel treatment from some members of their community. Some even seemed to take pleasure in the family’s suffering and blamed Ruma’s mother, Halima Begum for this condition. Turning to superstition, certain neighbors said that Ruma’s cleft was caused because her mother did some sinful act during pregnancy. The lady who helped deliver Ruma told Halima that surgery could repair her daughter’s cleft lip, but the procedure would come at a steep cost for the very poor farming family from Kamargram, Charkhai, Beanibazar, Sylhet.

Undeterred, Ruma’s parents began seeking out surgical care for their daughter despite they knew they could not afford it. They didn’t give up and believed that some miracle woother

spoon-fed milk, but it wasn’t enough for Ruma thrive. Ruma’s parents were very poor and living life in misery. Moreover, after her birth it turned uld change their condition. Ruma’s father was referred to a local doctor to see if he could help. However, the doctor didn’t have the equipment nor the training needed to perform surgery on the newborn. When Ruma was 6 weeks old, the family traveled to Sylhet town for treatment and found out Ruma was too young to receive surgery and refused without any further information.

Meanwhile, Ruma’s cleft lip and cleft palate made it difficult for her to breastfeed and she soon became underweight. Desperate for her daughter to gain weight, Ruma’s mworse. They had to sell the cow they used to own as their source of income to provide for Ruma’s milk as breastfeeding wasn’t possible and the family could barely afford it all. Fortunately for Ruma, spoon feeding ensured that she would survive until she could begin eating solid foods, which helped her return to better health. When Ruma’s parents finally learned that SNAD Foundation provides free, safe cleft surgeries and would be conducting a cleft camp in Sylhet town at IBN SINA Hospital Sylhet, their prayers were answered. 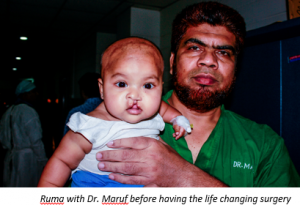 At the cleft camp a comprehensive health evaluation determined that Ruma was healthy enough to receive surgery to repair her cleft lip – she would have to return to a future camp for her cleft palate procedure. Her parents were overjoyed to learn that her life would soon be forever changed. All the while, the family continued to pray that Ruma would get the surgery she desperately needed as the odds for her future continued to worsen. Both of Ruma’s parents waited nervously as the medical team led by Project Director & Chief Surgeon Prof. (Dr.) Syed Shamsuddin Ahmed, SNADF Cleft Project, performed surgery. After her successful procedure was completed and Ruma awoke from anesthesia, the family poured out emotions when they were reunited in the post-operative room. After so much hardship, Ruma’s smile was finally whole.

When the family returned home, their neighbors were shocked by the difference in Ruma’s appearance. Ruma’s father told everyone in the village how well SNAD Foundation team cared for them, and he began reaching out to find other families who had children with cleft conditions. “Ruma doesn’t have trouble eating anymore. She is healthy and looks like all the other children” Eman Ahmed said of his daughter. “She’s normal now.” 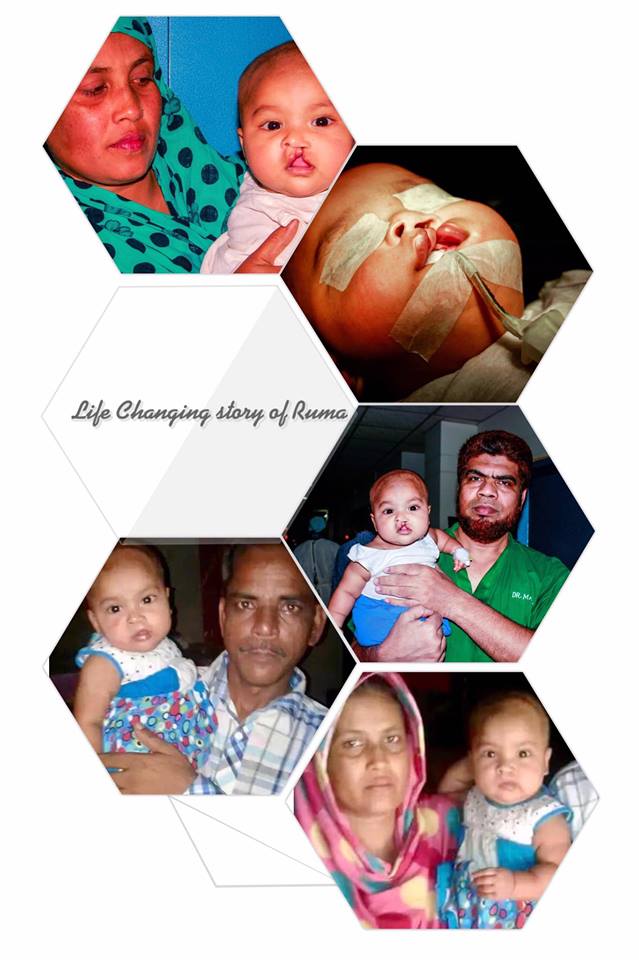 SNAD Foundation Bangladesh (SNADF), is a not-for-profit, non-government organization (NGO) of Bangladesh based in Dhaka registered from NGO Affairs Bureau of Bangladesh and Joint Stock of companies and firms, Dhaka.

Established in 2008 with an aim to make a difference in the lives of underprivileged women, children and youth and to look after the welfare of the community, make long lasting positive impact and provide basic necessities to those in need, empower them to build for themselves a better life in every aspect.